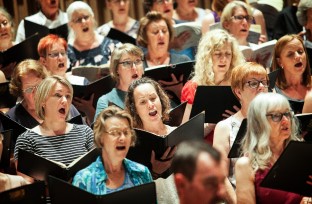 Have you ever wondered what it’s like to sing with a large, ambitious choir like Cambridge Philharmonic? Perhaps you used to sing a few years ago, and would like to get back into it? This is your chance to have a go.

Originally titled Missa in Angustiis (‘Mass for Troubled Times’), this mighty choral work was written at a time of national crisis for Austria, when Napoleon had defeated the Austrian army several times and even threatened Vienna. However, by the time of its first performance, the British – led by Admiral Nelson – had spectacularly defeated Napoleon’s forces at the Battle of the Nile. The new title, Nelson Mass, was cemented when Nelson visited Haydn’s patron Prince Esterházy and the work was performed in his honour.

One of Haydn’s most beloved choral works, the Nelson Mass brims with stormy choral and orchestral writing alongside coloratura fireworks from the soloists.  We are delighted to be joined by soprano Esther Mallett, mezzo-soprano Milette Gillow, tenor Samuel Kibble and bass Michael Ronan.

Conductor Harry Sever will lead the chorus, soloists and orchestra through a rehearsal in the afternoon (2.30-5.30pm); there is no need to practise beforehand and music will be provided, but your own pencil will be handy! There will then be an informal performance to a small audience at 7.30pm – audience tickets also available.

“I’m thrilled to open my first season as Music Director of Cambridge Philharmonic with this exciting Come & Sing event,” writes Harry Sever. “Our Chorus is a friendly and welcoming bunch, and we’re always looking for enthusiastic local singers to join us. We’d love for you to come and sing this wonderful work alongside our orchestra.”