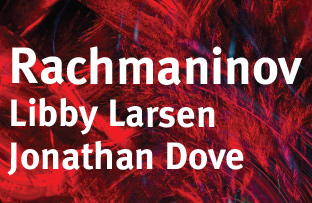 Jonathan Dove has become a regular feature of Cambridge Philharmonic’s programmes, and his vivid choral writing continues to thrill choirs and audiences around the world. His song cycle The Passing of the Year – dedicated to his mother – sets poems by Blake, Dickinson, Peele, Nash, and Tennyson, and is a virtuosic celebration of the movement of the seasons.

Contemporary American composer Libby Larsen’s choral cycle Alaska Spring is a setting of the poetry of Tom Sexton, Poet Laureate of Alaska. The musical and poetic landscapes speak of the frozen North Country; a mirror to Rachmaninov’s imagery in his Second Symphony.

Rachmaninov’s Symphony No. 2 is a swan song for his homeland which was facing such fundamental changes to its social and political landscape. Its luscious nostalgia pines for the Tchaikovsky-infused Romantic Russia of the 19th Century; but the violent march of modernity is never far in the distance.

COVID remains prevalent in the UK and WRCH has a duty to ensure all those entering the building – including audiences, performers, volunteers, and staff – are kept safe. Whilst domestic government COVID restrictions in England have now been removed, we must all continue to take steps to minimise the transmission of COVID and other respiratory communicable diseases.

West Road is well equipped to mitigate against transmission through use of ventilation and provision of sanitiser throughout the building.