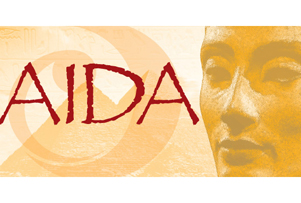 Although Verdi’s Aida might be considered the epitome of grand opera, with the spectacle of its triumphant Grand March set amongst the pyramids of Egypt, the plot is simple, devastating and uncompromisingly raw.

It is a tale of love and war, of loyalty and deception, and of the sacrifices lovers sometimes have to make for each other. Egypt and Ethiopia are at war. The Egyptian General Radamès secretly falls in love with the Ethiopian princess Aida, who is being held captive as a handmaiden to the Egyptian princess Amneris. But Amneris loves Radamès herself and she is growing suspicious. Suddenly the conflicts of battle are replaced with evermore complicated conflicts of the heart, with devastating consequences for all concerned.

This opera in concert features a stunning cast led by Linda Richardson, who sang Violetta in the Cambridge Philharmonic’s La Traviata and who recently starred in the title role of Madama Butterfly for Welsh National Opera.

A copy of the promotional flyer for this concert can be found here.

A copy of the concert programme can be found here: Aida programme